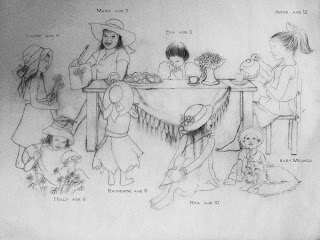 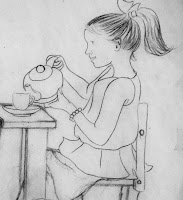 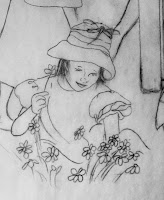 Notice the title change? All the sisters have been discussing the final title for this family portrait and Holly won with 'Sweet Tea'. Congratulations, Holly! 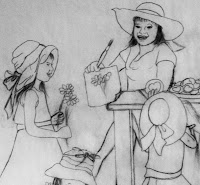 This is also the final sketch (hopefully). I'm pleased with it but I will probably get some feedback as most of the women represented in this portrait are watching my progress via this blog.


Each little girl is represented by something she is either associated with now (as an adult) or as a child.
P.S. I've added the closeups to better show detail.
Posted by Billie Crain at 11:50 AM

Gosh, a big undertaking but such an interesting commission to do.

Your research has paid off and the composition and explanation is wonderful.

I'll look forward to seeing how this evolves. Great stuff!

This has been the biggest challenge I've taken on to date, Jeanette. Hours of online searching for references, looking mostly for children in the correct positions. I finally had to resort to putting the head of one child onto the body of another, etc. There's a lot of 'winging it' going on, too. I got a call from my client last night giving me the green light to start painting. She loved the final sketch. *whew*

Hi Billie:) I knew you could do this. The sketch is beautiful. Very well done! Love the hats the girls wear. Good luck on the painting. I can't wait to see it:)

Thanks, Renate.:) And thanks so much for your support!

Yes, Thank you for doing this for me, and I can't wait to see the finished product either--but take your time since this is a challenge! Katherine

It has been my pleasure, Katherine.:) I plan to take my time and do the best possible job I can.

"WOW, what a pleasant surprise! The sketch is so much fun, it brings a smile, nostalgia, and love to the table! The title is sweet too. (ha ha), thanks, Holly