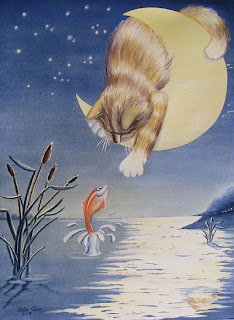 This one is finally completed. Yes! I've added the pastels and few other small details. I won't be able to have this one scanned because I used pearlescent paint on the fish and water splash. The mica in the paint would light up like a flash bulb but I just couldn't resist. It looks great IRL. I've photographed it myself and will copy to a CD for printing. Rachel, my print gal will have to make a few color corrections but my photo is pretty darn close. I lost a little of the yellow base color but I'm sure that can be recovered in PSP.

BTW, I'm looking for a title for this one. It'll always be Mike's Cat to me and of course, to Mike but I'm looking for something clever and more suitable. I'm open to suggestions!
Posted by Billie Crain at 8:31 PM 13 comments: 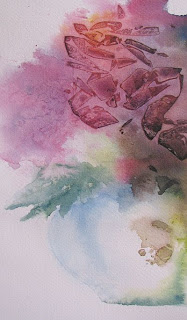 This is one of my experiments that miraculously I didn't toss out. It pays to hang onto your 'failures' sometimes. I'd had this one taped to my plexi for a few weeks and almost threw it out last night. As I looked at it I thought of old roses in a mixed bouquet, well past their prime, their beauty slowly fading while the filler flowers and foliage forged onward. I quickly painted in a vase to 'hold' my old roses and Voila! Well, it's not exactly a triumph but I learned a lesson. It pays to hang onto perceived flops just in case they might become your next masterpiece.
Posted by Billie Crain at 10:55 AM 4 comments: 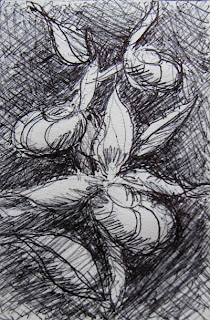 Even though I'm still adding the final touches to Mike's cat, I've decided I need to get started on my next floral. This time I've chosen Lady Slipper orchids and need to work out the composition. This is basically just scribbling on the back of an envelope with a ballpoint pen. I really should invest in a sketch book but somehow it never happens. I plan to pour the background and paint the orchids in more detail like East Meets West.
Posted by Billie Crain at 7:22 PM No comments: 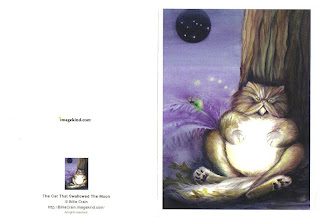 After opening my gallery on Imagekind I thought it would be a good idea to order some samples just to check the quality of their prints. I was also concerned that the images I uploaded were 'ok' and printable. I wanted to see what customers would be getting if they ordered. I bought four assorted greeting cards and they arrived today. The quality couldn't be better. I've scanned one card showing the back and front. Each card came in it's own acetate sleeve w/envelope.
Posted by Billie Crain at 2:42 PM 6 comments: 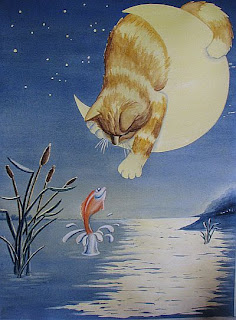 I've been working on Mike's cat for the last 5 days. This is when I'm reminded of just how fickle watercolor can be. What worked well the first time isn't cooperating this time. I remembered to mask in the stars and the cat's whiskers this time and I still need to paint the shadows/reflections of the cattails in the water. Then I'll be ready to add the pastels. I thought I'd post an update and include images of the process I'm using to create this particular piece. Sorry for that blurry image in the panorama but there's no going back now. Mike, I sure hope you like the changes!
Posted by Billie Crain at 9:45 AM 4 comments: 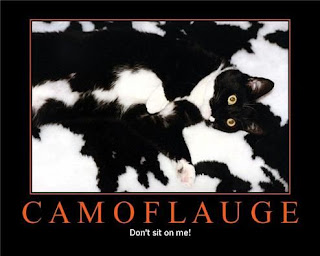 My son, James emailed me this image and I thought I'd share it with my visitors. Can you find the cat?
Posted by Billie Crain at 1:57 PM 8 comments:

Is anyone else having problems getting into their Yahoo mailbox today? I've had a battle opening mine so if anyone posts a comment and I don't publish it right away you'll know why. Blame Yahoo.
Posted by Billie Crain at 8:42 AM No comments: 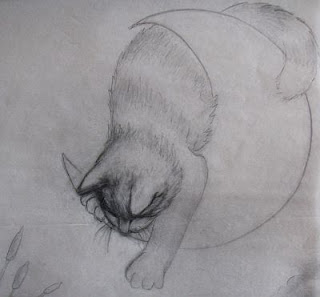 Here's what I hope is the final revision of this cat. With all the erasing, my paper held up like a champ. I only had to Scotch tape one spot. *eyeroll* This revision reads correct to my eye now. The right eye(viewer's right) looks a bit high but I don't think that area can take more erasing. I'll correct it when I transfer the drawing. My concern is that this cat will become too realistic. If that happens I'll have to make the other elements in this piece more realistic so they remain cohesive and I really don't want that to happen.
Posted by Billie Crain at 8:05 AM 2 comments:

I'll Never Be A Sculptor 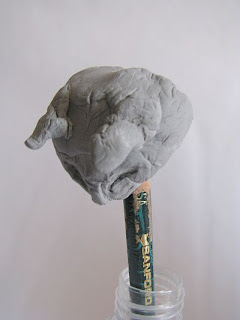 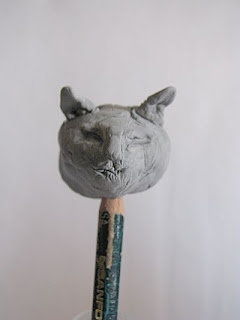 After trying to get the ear placement correct on my latest cat piece, I resorted to a suggestion given to me on Wetcanvas.com. I made a(very!)crude sculpture of a cat's head out of a kneaded eraser and bent it down in the desired position. I then bent the ears in the direction I wanted. I realized I was in the ballpark with recent corrections but wasn't quite all the way to home base. Please forgive my lack of sculpting skills. *LOL* I've done sillier things to help create my fantasy work. Oh well, it's all in the name of art...right?
Posted by Billie Crain at 10:29 AM 6 comments: 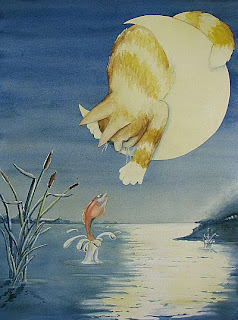 I thought I'd post a quick update. Here's where I'm at right now. I haven't added any pastels yet. I'll be using those to complete the cat's fur and also for the stars. I'm not 100% sure if the cat's head is 'reading' right. I tried to gently 'force' my male cat, Digby's head into a similar position to see how it looked. Ever try to force a cat to do anything? Don't!

I've got a line drawing for another floral pour waiting in the wings. It will be a grouping of Lady Slipper orchids. If it works out it should be nice.
Posted by Billie Crain at 12:57 PM 8 comments: 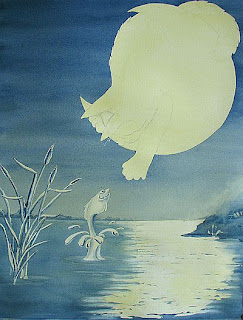 Sorry to be so late with an update. I haven't been feeling very well for more than a week and didn't feel at all like picking up a brush. I'm finally doing better so I began working on Mike's Cat last night. I've gotten the sky and lake pretty much completed. Mike wanted to see lots of Moon reflection in the water so I changed up the format to allow for that. Easy enough to do and I actually like it. I'm debating whether to include the tip of the cat's tail that wraps around the Moon in the reflection. I probably will before this one is done. The bit of landscape on the right will need major tweaking as well.

I switched my palette up a little by replacing FUB with Cobalt blue deep. I'm not sure I prefer the Cobalt over FUB, though. This one will be a do-over so I'm forging ahead anyway. I'm using my blues to create a grisaille on the cattails and the fish. Right now it looks a little 'two-note' colorwise. As you probably noticed, the horizan line appears concave. Some is camera distortion and some is real. I used my square to check for level and found it to be 'off' just a tad. I used up my good artist's tape and had to rely on very cheap masking tape which apparently doesn't always go down perfectly straight. I'll know better next time.
Note to self: Add stars to the sky!
Posted by Billie Crain at 1:47 PM 3 comments: