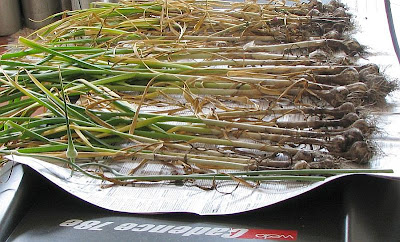 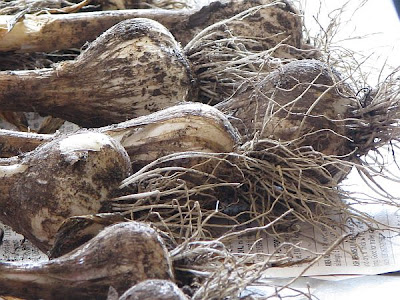 Here's my harvest hanging out on newspaper on my treadmill. Garlic has to cure for 3-4 weeks before getting a clean up and heading to the table or being made into a braid.﻿

I wish I had some artwork to post but I haven't felt very creative the past few days. This heat wave we're experiencing has raised hob with my breathing and yesterday I woke up with laryngitis, probably from spending too much time near the AC. I knew I had to harvest my garlic before the predicted rain arrived so I waited until almost 10pm last night to venture out and get it done. At least the temps were tolerable at that time and unbeknownst to me my Cheap Joe's order had been delivered and was lying on my porch. It would've laid there all night had I not gone out.

Last Fall I planted three varieties of garlic, 2 hard neck and 1 soft neck. All did pretty well and it was a successful harvest. For those that have never grown garlic, the hard neck varieties produce scapes which are the stems and flower buds and these must be removed so all the plants' energy goes into the bulbs. Garlic scapes make delicious pesto. I cut the scapes earlier in the month and made a batch which is almost gone already. Wonderful on pasta (of course) and this pesto is also great on burgers.

Posted by Billie Crain at 3:07 PM No comments: 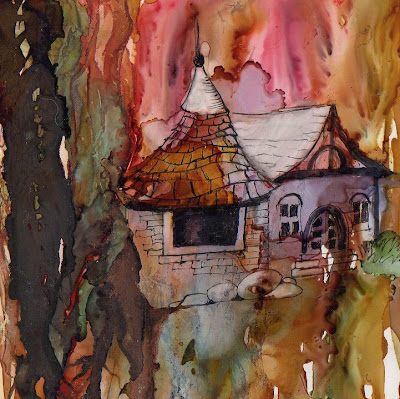 Too much? I think so. I could go hog wild with the colors on a smaller, less complicated painting but I estimate the finished piece planned will be approx. 15" x 10" (at least) so all these colors would probably be overwhelming . I had to try, though. I also discovered I need supplies, mostly more Micron pens, so I put in an order last night. I'll have plenty of time to play some more while I wait for them to arrive.
Posted by Billie Crain at 4:11 PM No comments: 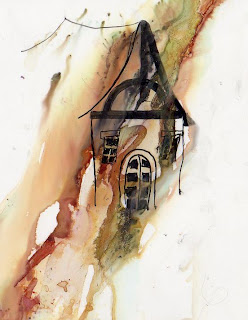 Last night I did a quick sketch on a scrap of Yupo with Micron pen and Sharpie, then sprayed with a generous coating of Krylon workable fixative. Today I chose a palette of Ranger's Willow and Terracotta alcohol ink and did a pour, letting the colors mingle. Sharpie ink will bleed slightly when alcohol is applied and it creates a grey/blue color which I think works well with this palette. The workable fixative keeps the alcohol ink from spreading out and taking over. In short, it makes it slightly more manageable. I did drop in some rubbing alcohol with my oiler boiler to get the ink moving in the right direction. I noticed a few interesting textures appeared as the ink dried which I really liked. I'm not sure how that happened but suspect the workable fixative may have had something to do with it. I plan to try a few other color options but I really like this one at the moment.
Posted by Billie Crain at 11:16 AM 4 comments: 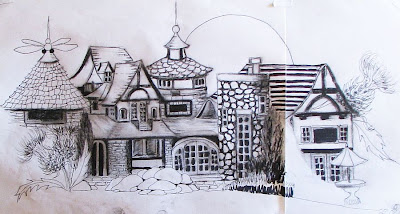 Last night and today I've been tweaking my original sketch. Well, actually I drew an entirely new sketch and played with the angles and textures. I added a few whimsical touches as well. I'm not finished with it yet but I wanted to post an update and see it on the monitor. Mistakes can become glaring on a computer screen that aren't so apparent on the easel. I worked with a lot of charcoal and Micron pen to see what this might look like upon completion. While studying Lumila's work I noted that success with this style depends a lot on the right distribution of small(fine) and large(heavy) textures, variations of mark making and shapes. It's about throwing perspective to the wind and simply putting things where the artist wants to see them. This style suits me on so many levels. I love whimsy, I'm lousy at perspective and it should fit nicely into my goal of creating a consistent body of work. Win, win.

Posted by Billie Crain at 1:11 PM No comments:

Yes, it's my first house. "What?!" you say? She just posted about creating a consistent body of work! Trust me, there's method to my madness...I think.

I drew the sketch last night from a wonderful photo reference courtesy of Ted Duckworth of Charlevoix. I had already been considering doing a series featuring Earl Young's 'mushroom houses' (as they are affectionately named by the locals) but there was one on Thistle Downs Drive that I especially love but wasn't quite sure if it was a true Earl Young house. When I saw Ted's photo on Facebook I knew it must be a sign. It's a difficult house to photograph because of it's location which is on Round Lake where the channel empties into the harbor. The majority of the house spills down over a steep hill to a lovely yard and a run of boat docks, the main entrance is butted up to Thistle Downs Drive which is really no more than a short, dead end alleyway.

Today I did some research and discovered it was the original creation of Earl Young's daughter, Virginia Young Olsen who went on to design several homes based on the style of her father homes. My search lead me from the internet to a real estate agent to the local Historical Society and finally to the actual owners, Lowell & Sharon Blossom. I had a lovely conversation with Mr. Blossom and learned the house was built in 1957. The Blossoms purchased it in 1997 and the following year began to add on but not without talking Virginia (the original designer) into being the design consultant first. They wanted to keep the 'Mother Goose' (Lowell's term) sensibility intact while adding space. He told me he had to do a lot of convincing to get Virginia onboard but obviously the effort was worth it. The project was completed in 2000 and the result is spectacular.

Back to the consistent body of work now. I've decided to stick with the alcohol inks for a time and see where this medium takes me. I'm also a fan of the Russian artist, Ludmila Shambina http://ilemle.ru/shambina/text.html.  I love her crazy landscapes and buildings. If you follow the link I posted, scroll down to the third painting featured to see the work that has inspired me most. Her website is entirely in Russian and from what Bing translator gave me, I believe she works on watercolor paper and rice paper but I can see this done with Micron pen and alcohol ink, possibly on Yupo. I need to do some experimenting which is my next project. The house on Thistle Downs lends itself perfectly to such interpretation but I would rather not go quite that far afield in respect for this beautiful home and all the Blossom family has done to preserve it's integrity.
Posted by Billie Crain at 12:47 PM No comments:

Creating a Body of Work

The subject of this post is something that I've pondered for quite some time. Do I have a legitimate body of work? I'm not entirely sure at this point. I found a YouTube video on Col Mitchell's Facebook art page that addressed this very subject and that I will share with my readers today. Truth be told I tend to bore easily, lack discipline and become easily distracted by yet another style, subject, etc. For example, I recently found the most amazing artwork that fascinated me. How did this artist do this?! She had created textures in either paint or ink I had never seen before and I was enthralled. Unfortunately I neglected to bookmark the website and I can not find it again! I don't recall her name or how I stumbled onto her work in the first place so for the last few days I've been scouring the net, hot on the hunt and with no luck. How much painting have I gotten done? None! Anyway, I digress....

Today I've been asking myself "What do I have to offer the art world that is unique to me, that I am passionate about and that would keep me focused?" Well, I never tire of Nature and organic shapes, I adore texture of any kind and love to incorporate it into my work. I shy away from anything that is/seems tedious to paint and I seek to work with more freedom of expression but I like to also add at least a small element of realism to satisfy the part of me that needs things to make obvious sense. I may add to this list but I already have enough to narrow down my options and find a direction. The trick for me will be to stay on that path for a month, a year...who knows?

I hope you will take a few minutes to watch this video. There are many ways to create a consistent body of work.