I have had questions put to me and my own concerns about working with alcohol ink on waxed paper. How archival could these paintings be? From my online searches the coating wax is described as purified paraffin but I can find nothing about the paper that is used in the process. Is it acid free? Probably not and because I crumple the paper to expose it I felt I needed to address this issue. I found Krylon's 'Make It Acid Free' spray , (link) available at Dick Blick or Jerry's Artarama in the US. I crumpled my paper, then treated both sides with this spray before applying the inks. I found no difference in the way the inks reacted on the treated waxed paper and feel much better about the longevity of my faux batik ink paintings.
Posted by Billie Crain at 3:05 PM 2 comments: 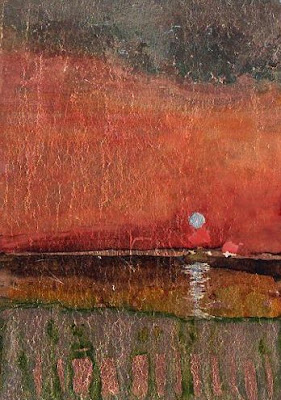 Another experiment and I think this has definite possibilities! I applied Mona Lisa copper Simple Leaf with Mona Lisa leaf adhesive to a 5" x 7" piece of Yupo. I then applied the inks, hoping to create a semi-abstract seascape at sunset. The inks reacted well on the copper leafed surface giving me slightly more control than on plain Yupo. I was even able to apply ink in a more painterly fashion to the sky area with a small flat brush. I did add a little rubbing alcohol to the lower portion to get ink moving but it didn't seem to affect the leaf at all. I also like the texture the leaf created when applied. I've got another piece in the works using silver Simple Leaf. The silver leaf went on with much less texture so we'll see what I can do with that.

Back to the Inks 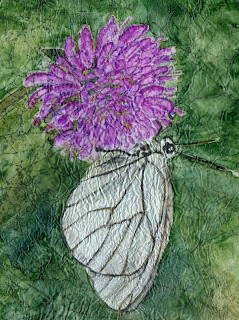 April 2013 has not been a productive month for me. I managed to create more paintings than usual, all of which landed in File 13. It seems that not only trying a new style but also a new subject has proved folly for me. I had hopes of whipping up a Shirley Trevena style still life but that didn't happen. In the meantime a laundry list of to-dos was piling up behind me so I had to stop and take care of business. I didn't expect to lose Digby either but it happened and I've needed a few days to grieve. It really threw me for a loop to be honest. Maybe as I get older these things hit harder.

Art is good therapy so I got out the one medium that gives me the most pleasure at the moment and painted this butterfly using my faux batik technique .

Note: My reference photo was courtesy of Veronique on Paint My Photo.
Posted by Billie Crain at 1:52 PM 2 comments: ...I had to say goodbye to my cat, Digby today. I gave him several nicknames over the years but 'Bubba' seemed to stick. He was a rescue, less than a year old, when he came to live with us permanently. He'd lost trust in humans but once we resocialized him we couldn't ask for a better cat. I live in a park and he became quite a fixture here among the other residents. Everybody knew Digby because he was everybody's friend. In the warm months he would make his rounds of the park and do his 'sociables', visiting anyone that was home and had an open door he could wander through. He never overstayed his welcome, so I was told, and kept his visits brief. He adored kids, even the little ones that pulled his tail, and would head anywhere he heard kids playing. One summer the neighborhood kids must have been playing with squirt guns filled with colored water. Digby came home with his white fur covered in pink and blue splotches. I wiped him off but he must have rejoined the games because he showed up more than once that day sporting pink and blue fur. He was gentle and patient with me, slept in bed next to me and once he discovered how great a lap was he became 'the lap monster'. He left me alone if I was busy but when the day was done and I sat down on the sofa to watch TV it was 'lap time' and he was a great lap warmer in winter, a wonderful companion and a very special kitty. I will miss him so much.
Posted by Billie Crain at 8:39 PM 6 comments: