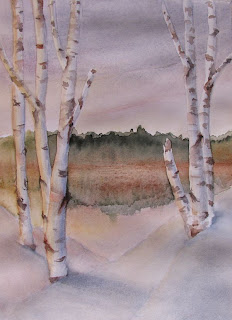 Same study, more tweaking. I darkened the foreground, shadows and some of the sky. Because of the light today my sky looks lavendar and the white of the birch bark is lost. 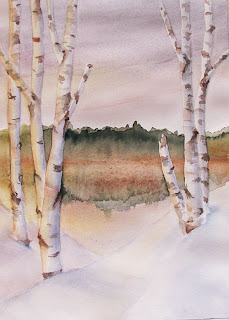 This is the best photo I could get of my latest birch study but it should convey an idea of the sunrise effect. I will most likely play with this some more and bring in some deeper shadows on the snow in the foreground. If it doesn't work out it's just a study. I used to hate doing studies and thought they were a waste of time but now I'm enjoying them, especially when I'm so far out of my comfort zone. They waste less paper, less time and they provide a wealth of much needed information.
I emailed my customer the last two color sketches/studies and she decided on the second sketch. She said it looked the most like the area where she lives and I have to agree. She didn't care for all the orange and red in the first study but did say she was open to bringing in a little more color to the one she did choose and suggested a sunset landscape. I thought early sunrise would work much better. I love the look of all those amazing pastel colors that bathe the landscape just before the sun appears on the horizan. At that time of day there's usually a bit of mist hanging over the lake and the waters are usually calm and reflective.
Posted by Billie Crain at 10:09 AM 9 comments: 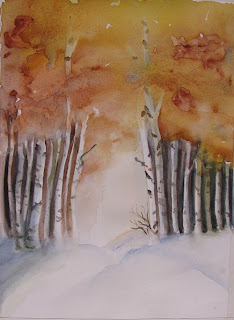 This was done w/o any prior pencil sketch and some negative painting. The trees on the right are lined up like ducks in a shooting gallery but that's an easy fix. 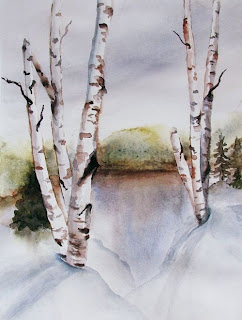 This one brought in that cold winter 'feel' but it's rather dull. I need to work out something better for the foreground, too.

Even though I haven't been posting much lately I have been working. Landscapes aren't a strong point for me and this one poses extra challenges. The customer would like certain colors included in the finished painting and it also has to tie into the companion painting, Berries & Birch #1. The obvious choice would be to use those colors, a grey blue and burnt sienna, to make them mesh. So far I've done 6 color sketches and these are the latest two, done quickly and 'sketchy'. I'm not entirely satisfied with either but I wanted to get them up on the computer to see how they look. Sometimes seeing an idea on screen reveals things I can improve on and tweak to get the desired result or in the worst case...to just chuck the whole idea and start again.
Posted by Billie Crain at 10:03 AM 5 comments: 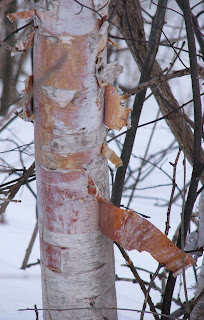 This image was taken on a cloudy day. I can hardly wait for a sunny day!
If you don't work plein air(which I don't) you should at least know your subject. That's probably why I do well painting cats and florals....I own cats and I grow flowers. I have a passion for these subjects because they mean something to me on an emotional level. Today I took the time to really look at birch trees in an effort to really see them. I can't speak for everyone but I know if I have something around me everyday I tend to stop seeing and just look. There's a difference. It's subtle but it's important.
I'm quoting myself here..."Face it...birch are pretty much black and white, a few interesting greys with a peek of peach color where the bark has peeled back." Boy, was I wrong.
Across the drive from my home there's several natural stands of white birch aka canoe birch aka paper birch. I look at these trees every single day and have for years but today I saw them and what I saw was incredibly beautiful and unexpected. I was so excited I couldn't help but grab my camera and capture some images. How could I have missed such incredible color all these years? I looked but I wasn't seeing.
Posted by Billie Crain at 1:30 PM 2 comments: 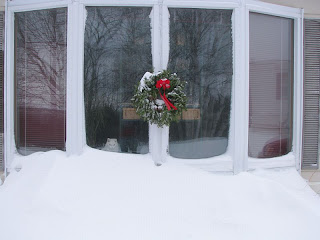 January in Michigan and one cat with serious cabin fever...my Digby. We've had a recent thaw and I've since taken down the wreath. I posted this because of the expression on his face. After creating yet another unsatisfactory birch painting, I caught a glimpse of myself in the mirror and saw I was wearing the same exasperated look.
Yes, I seem to be stuck at the moment. Not a good way to enter the new year but here I am nonetheless.

Berries & Birch #1 has been spoken for and the customer would like a companion piece to go with. As this is a fairly close view of a birch I'd love to do a birch landscape. I was blown away by
Cecy Turner's 'Early Winter'. A cropped version of this painting was featured on the cover of the February issue of Watercolor Artist and it's simply yummy. It's a birch landscape but the painting is really about the colors. I love the reflected glow on the birch bark. Face it...birch are pretty much black and white, a few interesting greys with a peek of peach color where the bark has peeled back. Anything to spice up a birch landscape is welcome. I drew up a new landscape that would fit my format and I knew I would have to tweak the colors to have it make sense beside the first painting. Sadly, my version didn't make the cut. Make that version...sss. I've painted this three times and I'm still not happy. Nothing even worth posting, IMO.

Feeling frustrated, I started Googling birch trees in watercolor and stumbled across
Guan Weixing's 'Autumn Rhythm'. Wow! Artists are doing wonderful things with birch trees. Why can't I seem to find a way? Last night I found myself lying awake in bed wracking my brain for an idea that would work for me, my customer and ultimately, the companion painting. If the two paintings work together everyone will be happy. I think it's time to walk away for a bit and clear my head. Time to let go of the thought process and let the creative part of me work it out. Does anyone else ever run into this? I hope it's not just me. :(
__________________________________________________________
Note: I can't seem to link directly to Cecy's painting. Follow the link I posted and select 'Landscapes' on her site. The painting I refer to is in the second vertical row, 6th painting down. You won't be sorry for your trouble. It's gorgeous.
Posted by Billie Crain at 10:23 AM 3 comments: 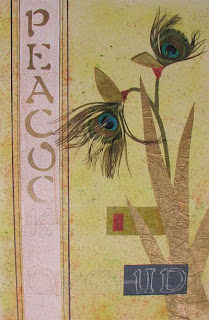 Sorry for the bad photo. Grey days and photo distortion make for bad pictures. My lines are straight!
JoAnn Fabrics opened a huge new store in Petoskey so a friend and I spent almost two hours last Wednesday browsing the place. Talk about creative overload! Crafters/artists alike could easily go broke in a place like that. I've wanted to try my hand at collage art so I picked up a few things. Not knowing what I needed or without any plan whatsoever, I grabbed a stamp, some ink pads and a gold metallic oil based paint marker that promised a heavy pigment load. I hate wimpy metallics and this marker delivered. Unfortunately, because I used it on a porous surface it ran out of paint before I completed the lettering. 140# w/c paper sucked up that paint like crazy. I should've known. Live and learn.
The next task was to come up with a concept. I don't have any crafting supplies other than what I had just purchased but I knew I had some lovely paper samples that I received from Twinrocker. Problem...they're small. This was going to be a creative project in more ways than one. I did find some gold tissue paper left from Xmas but it was too flimsy to work with so I crumpled it , then glued it to tracing paper with good old Elmers. It worked! Next, I found some peacock feathers I've had in a brass vase for years so I grabbed those. That's when my concept was born. I'd make peacock orchids out of real peacock feathers!
Then came lettering. I found a free font site online and copied a few fonts I liked, chose one and traced and transferred it to my paper. I would've loved to have used my own script but my handwriting is awful.:( This project is now on hold until I can get back to JoAnn's and pick up another pen which, after this collage is completed I won't use again on another porous surface. These markers aren't cheap. I vowed to also buy a book on collage art which I'm sure will prove very useful with my next attempt.
Posted by Billie Crain at 10:38 AM 9 comments: