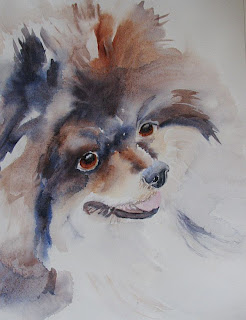 I used a gorgeous reference image of a pomeranian for this one that I found in the WC RIL, submitted by fancycat. I chose a pomeranian for my first w/c dog because I have a good friend that used to breed them and they're beautiful dogs. Very energetic and smart. I had never seen pups born before and was called to help out when one of my friend's females had her first litter. It was an amazing experience! Judging by the coloring in the photo, I'd say this one would be called a Wolf Sable in the pom world and by the looks of his high brushed 'mane' I'm thinking this must be a show dog.

IMO, dogs are much more difficult to paint than cats. Their noses are more complicated structurally and I found the eyes trickier to get right. I think I should practice just painting canine eyes for awhile before attempting another dog. I used a palette mainly of FUB and burnt sienna. The eyes were another story. They didn't show up well in the reference photo so I had to improvise. I made use of a tutorial on WC to help me make them believable. Getting the color correct was hard. There's even some magenta in them although you'd never know it.
Posted by Billie Crain at 3:16 PM

Looks good to me Billie! I love the high brushed "mane". So are the cats jealous?

The eyes are lovely and luminous Billie - and I really like the freedom of marks that of used.

Thank you, Vivien.:) I think I'm finally on my way to achieving a major goal of mine...to loosen up and become more expressive in my painting.

Well done Billie I love how you mingled the colors and yes the eyes really captivating :)

Thanks, Tracey! I found even though dog's eyes look easier to paint than a cat's eyes, they are not.