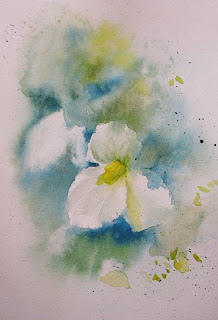 Last year I took several photos of trilliums for reference but never did a thing with them. Instead I went off on another tangent and the images were forgotten. In 2009 Spring came about 6 weeks late and stayed all summer so trilliums were scarce. This year Spring has arrived very early in N. Michigan. The trilliums aren't blooming yet, though. The poor things probably don't know what's going on!

This is more of a study than a finished painting. I wanted to try Kemp's paper prep technique with HP Fabriano w/c paper. Hotpress paper contains a lot more sizing than coldpress so I was able to achieve more detail and definition but it tended to dry out much faster which presented it's own problems. Lesson learned? HP paper needs to be soaked to maintain the same moisture levels as CP. Just brushing water on both sides of HP won't work. The good news...it all depends on the end result you want which paper will work best using Linda Kemp's prep method.
Posted by Billie Crain at 10:04 AM

Hi Billie..
this is the way for me, having many ideas and photos and then there just isn’t enough time or you go in another direction.
You study is delightful!
I also found HP needs to be thoroughly soaked through.. with my latest watercolours i actually placed them in a water bath = in the tub! :D
Enjoy the arrival of early spring.

I love trilliums, Billie and this is such a nice tribute to them ! Only thing about them is that by the time I remember they should be out, they're done ! I like what you're going with your new techniques. Go Girl ! :)

Yes, I figured the HP would present some issues. I hated the stuff when I first tried it but loved the look of the smooth surface so much I vowed to conquer it.

Winters can be so long and dreary here. Every year some of us pray for an early Spring in N. Michigan but it never comes. This is the first year our prayers have been answered! lol

Glad you like this one, Janet.:)
I'm surprised I didn't do something with the photos last year. It was a real hunt to find any trilliums. The wild forget-me-nots didn't bloom at all.

My goal is to create something I can float mount and I'm liking painting all the way to the edge of my paper. I can never keep my borders clean anyway.

This really is lovely, Billie! I've never tried soaking HP paper. I'll have to give it a go sometime.

Patty, I didn't soak the HP in this case. I just wet it on both sides with a brush. I've never soaked paper...CP or HP because I don't stretch paper. I'm lazy. Glad you like this!