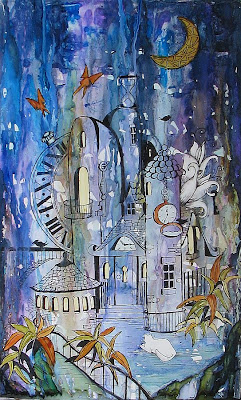 Although it doesn't look like I made any changes, I made a few. I used blending solution to bleed some background color into the lilies and the cat. They looked too stark before, at least to my eye. The image doesn't show it but I also added some Pearl Mixative to the large key and the hour glass to bring them both out of the background. Fighting the urge to fiddle anymore, I put my inks down and called this complete. Some of the ink colors are as difficult to photograph as they are to scan. An example is the 'neon' blue in the upper left corner. That passage isn't anywhere near as 'violent' IRL. The Moon isn't as muddy as it appears here either. I also decided not to re-ink the areas where the Micron pen was washed away by the alcohol inks. I like the lost edges.

Note: The only problem with using rubbing alcohol with Ranger inks is it's tendency to dull the shiny finish. I'm going to apply several coats of Krylon gloss UV protectant varnish to bring back the shine and make the colors appear more vibrant.
Posted by Billie Crain at 11:36 AM

It is wonderfull! I keep looking at it. :)

I'm so glad you like how it turned out, Cecile!