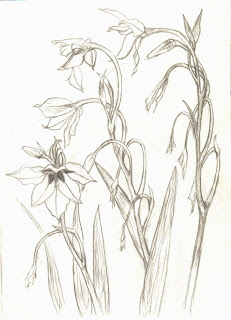 Above is a more detailed life sketch, done yesterday when the weather was cooperating. I did it mostly to record the plant form but I think it has possibilities as a composition.

Below is one of my life sketches with notes I took. Something I never noticed...the top most petal doesn't have the characteristic maroon markings of the other petals. If I had been given a pop quiz on this subject I would've failed. :( 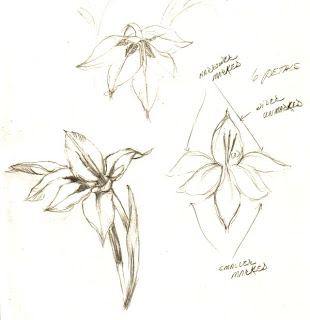 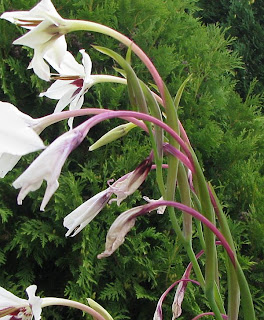 Photo of the intricate 'braided' flowering stems. This year the peacock orchids have grown taller than usual...some topping 3 feet with as many as 10 blooms along the one main stem. With this many blooms on a stem the braided effect became very apparent and something I wanted to record for future reference. 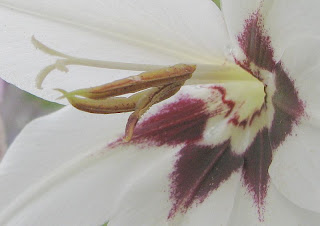 A nice clear closeup of the anther and stamens...good to have. 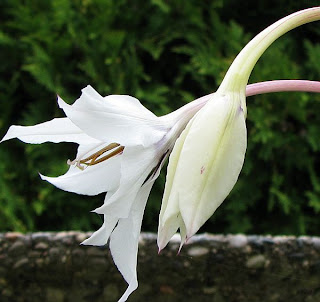 The two images directly above...buds in various stages of opening. 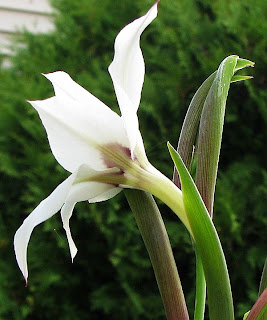 As I was working out my drawing I realized I didn't know what my subject looked like from this angle. I didn't have a clear photo on hand at the time. 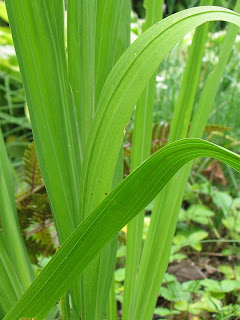 The other night I started making plans and doing sketches for a painting of peacock orchids. While sketching I realized I wasn't as familiar with these flowers as I originally thought. I've grown them for years but never really studied them. I was stumped as to how they looked from certain angles, how their stamens and anthers appeared, I had questions about the texture of the foliage, etc. so I decided to study my subject. I did several sketches from life, took notes and snapped multiple photos...long shots, closeups, super macros. I'm becoming so methodical lately. This is something I need to include in my process more often. If you work primarily from photos as I do you can't have too much information at hand. If at all possible take time to closely observe your subject/subjects, sketch, make notes and take lots photos from many different angles.
Posted by Billie Crain at 11:34 AM

I love your photos and sketches of these flowers. I always think its so wise to do some studies before jumping into the main painting.

These flowers have some many possibilities at so many angles. I need to get some of these for my garden. I may even be tempted to paint or draw on then!

They're so easy to grow, Jeanette and the bulbs are inexpensive. I think I paid $7.95 US for 25 good size bulbs. The only down side..they aren't hardy in colder zones but I think they're worth the yearly cost. I didn't have much luck pulling & storing them in the Fall. They wouldn't bloom the following year for some reason.

As for spending extra prep time with the artwork, I totally agree with you. I feel so much more confident when I start a painting with a real plan.

I love the more finished sketch at the top and I agree that it does have potential in terms of composition. There's a great diagonal line moving from top right to bottom left and there's movemet in the plants. I hope to see it developed intosomething bigger!

The comp was totally accidental, Caroline but I agree...it works. The forward facing flower on the viewer's left stops the diagonal motion and helps avoid leading the eye out of the painting. I do plan to develop it further.

Not sure I've ever seen the braided stem flower...beautiful sketch, and that is going to make one heck of nice comp and painting...esp if you do it as well as the sunflower. Go Billie!

I'm going, Nick.:) The stems aren't actually braided but they look that way. I'm still working out ideas for this painting. Not sure yet how I want to tackle it.