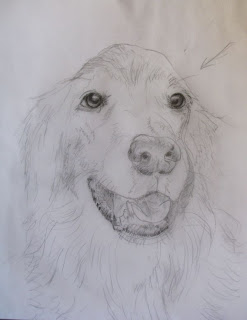 From looking at the other photos of Sydney I noticed her eyes were quite large so I increased the size here which also worked to lessen the distortion. I enlarged the width of the top of her head, too. I also fixed the flash bulb eyes. Now to sort out the light source. 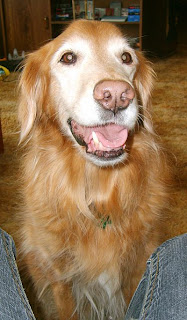 My niece Kali's Golden Retriever, Sydney recently passed away quite unexpectedly and she requested a portrait. She had some nice large file photos of Sydney for me to reference which will help greatly. She also hoped I could paint Sydney with her mouth open which apparently was her normal expression. We had a Golden when the kids were little and he always had his mouth open in a perpetual goofy grin so it must be a Golden 'thing'. Kali provided me with one shot of her dog with her mouth open but the camera distortion wasn't going to make a nice portrait IMO so I'm sorting that problem out first. The photo was taken fairly close to the dog's face making the nose look too large, the eyes and head too small. It was also taken indoors with a flash so I'd like to change the light source. I don't want to lose the angle of the shot completely, just lessen it a bit.

This is a very rough sketch and I'm posting it mainly for my own purposes. I can spot things on screen I often miss IRL.
Posted by Billie Crain at 12:02 PM

Billie, it looks like you have been busy and successful, keep it up. Nice work!

I'm fairly new to painting dogs, Vera. They aren't as easy to paint as cats, IMO.