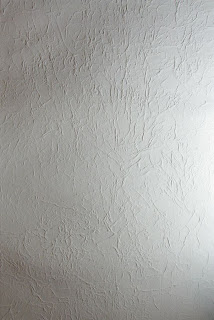 This is the final surface I have to work with, remounted onto my working board. The buckling is mostly gone. The lighting I've used has created shadows that look like the buckling is worse than it is IRL. 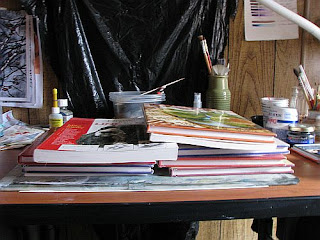 I removed the prepared paper from my board, dampened the backside and weighted it down to flatten out the buckles. I was also concerned about tearing when I removed the tape as it had several layers of gesso over it plus the tissue. I took an Exacto knife and ran it along the inside edges of the tape before finally stripping off the tape completely. I'm glad I did that as I may have had problems later down the line. 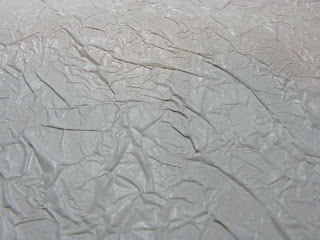 Closeup of the texture from the crumpled tissue paper. This is before I applied the last coat of gesso. Lots of air trapped underneath at this point. 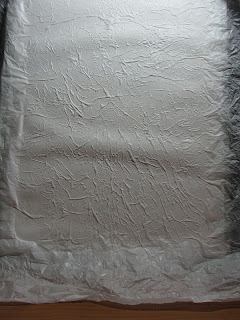 I've just applied the tissue to the second layer of gesso. You can see the buckling problem.


I finally decided to abandon my first version of Berries & Birch II. Even though there were passages I loved, the majority of the painting wasn't happening for me. Taking my last sheet of Arches HP, I covered it with a layer of acrylic gesso and decided to start again. Then I got the bright idea to add a layer of crumpled tissue paper for added texture. I've learned the hard way that trying to embed tissue paper into a thick wet layer of gesso is a very bad idea (the tissue will disintegrate) so I allowed the first layer to dry completely, then laid down a thinner layer and applied my tissue. When that was dry I trimmed off the excess tissue around the edges and thinned my gesso with a little bit of water and applied yet another thin layer of gesso. I did get some buckling so I removed the entire sheet of paper from the board, dampened the back and used heavy books to weight it down. It took 2 days to dry but removed the worst of the buckling.
_______________
The next step will be to transfer my drawing onto this surface. After that it's anyone's guess(including mine) how things will turn out. Stay tuned.............
Posted by Billie Crain at 2:46 PM

Billie, very interesting, great texture. i can`t wait to see how this progresses

Krista and Patty...sorry to be so late in replying. I had lots of fun playing with this texture.:)I plan to give it another go very soon.