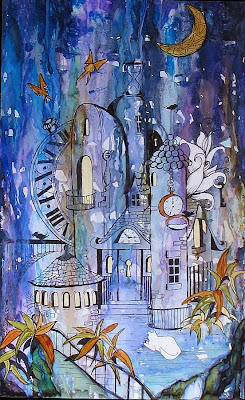 Nothing is more scary or knot-in-the-stomach exciting as spending hours drawing, transferring and inking a piece only to turn little tiny bottles of alcohol ink loose on what you painstakingly created with absolutely no idea what will happen. I thought watercolor was unpredictable but this medium trumps it hands down. As I've worked with these inks and have come to know how they can react with each other I went in with a vague idea of what I wanted to happen but knew it may not become a reality. This piece is roughly 10 1/2" x 17" and painted in portrait format (obviously). Alcohol ink dries incredibly fast so the challenge was to keep it moving while I added various colors and 17" is a long run. Anything could and did happen as these inks moved down the Yupo. Some cool textures formed and some very interesting secondary colors appeared.

﻿ I had decided at the beginning I would use rubbing alcohol to move the inks because the blending solution tends to dilute the colors and I wanted to keep the dark colors dark. I also knew this would be a one shot deal. I had already masked off the areas I wanted to save and hand paint later like the Moon, the moths, the window openings, the cat and the lilies. I wish now I had masked off the larger key but I may be able to work with it or I may decide to leave it. You can see a shape there and it invites the viewer to come in for a closer look.

What a fascinating painting! It's beautiful.

Well it looks like this technique came together for you. I love the colours and how they formed patterns for the sky and building.

It must be a bit heartstopping to put down the next layer.

Thank you so much, Christiane!

You hope for the best but prepare for the worst when pouring with these inks, Jeanette. Especially on this scale. Once the ink starts flowing it's a race against time and I didn't realize I was holding my breath until it was over. Talk about the thrill of making art!