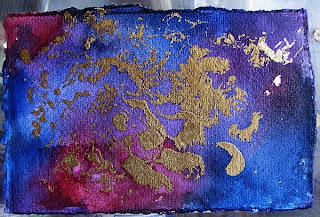 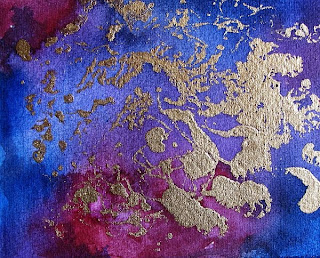 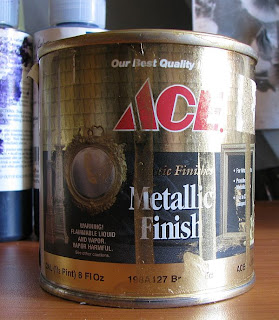 This afternoon I decided to try Ann Blockley's technique of applying oil based metallic paint onto wet watercolor. My first attempt was an abysmal failure. My paper was too wet, I had too much pigment on it which wound up on me, on my worktable, everywhere and the oil paint just floated around on the surface, threatening to slide off the sides of the paper if I made a wrong move. This time I tried less water/pigment and used a spritz bottle of water to get the pigment to move taking the metallic paint along with it. I used a bamboo skewer to dot on the oil based paint and coax it a bit in some places. I'm not entirely happy with my second try but it's much better than the first. I'm wondering if I should thin the oil paint a little. I'm not getting the same results as Ann even though I do like the effect I did achieve. I want it to disperse more and not produce such a heavy layer on the paper when dry. One benefit of the oil paint...it is permanent. When they are dry, you can easily go back in with more pigment around oil based metallics to deepen values or adjust color. I also have a can of silver enamel I may experiment with. I think this is a technique worth pursuing as the effects created make dramatic backgrounds when done well.
Posted by Billie Crain at 4:20 PM

Interesting mix of materials. Doesn't the oil damage the paper without a ground surface first? I love gilding. I have seen it used recently a lot in backgrounds. I will enjoy seeing how you use it. A bronze cat?

I love the resulting effect! I am looking forward to seeing where this experiment leads you. Fascinating! Good luck.

Robin, the oil base paint doesn't seem to damage the paper but it sure eats through the bottom of those flimsy yogurt cups. I would love to try adding metallic oil paint to a few backgrounds if I can manage to create the right effect.

Thanks, Christiane.:) The experimenting continues today. I'm hoping I'll be able to get a few photos of my results before the day is over. Still waiting for things to dry at the moment.