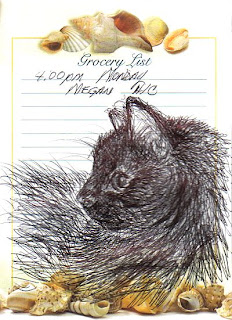 My sketch book is anything I have handy that will accept pencil or ink. This is my sketch of Gizmo or Lil 'Mo as we sometimes call her. I'm also scheduled for a haircut on Monday as you can see. :D
I haven't posted anything new on my blog for a week...more(?) so I thought I'd check in. I began working on a new project last Tuesday. I planned another floral, this time on gessoed paper. I was full of wonderful ideas I was sure would work. I wanted to do a spin (no pun intended) on the twirled poppy I created in Elements. Using gold and white tissue paper I found among my Christmas 'stuff', the idea was to embed it in the gesso and manipulate it to create the desired texture and form I envisioned. Also I had a specific finished size in mind (24" x 24" matted and framed) so I needed my paper cut to at least 19" x 19". After cutting my paper I realized I didn't have a board big enough to tape it on so I covered a large piece of cardboard I had saved (I knew I'd need that one day!) with clear contact paper and got everything ready to gesso.

I had to place the papered board on my studio floor because my space is very limited. This was at night when I'm usually the most creative and it was pouring rain outside. I'm terribly messy when I apply gesso and it seems to get everywhere no matter how careful I try to be. In the midst of applying the gesso my neighbor, Joe began knocking on my door and told me I had left my interior lights on in my car. Knowing I hadn't been in my car since the day before, the fear that my battery was probably ready to die was a real possiblity. With both of us standing outside in the rain it was eventually discovered that the hatch on my Suburu Outback wasn't latching properly which in turn kept the interior lights from shutting off. Who knew? Anyway, with Joe's help we solved the crisis, the battery was still ok and neither of us melted in the rain. Of course I got gesso everywhere which had to be cleaned up.

Afterwards I came in and added the tissue paper to the gesso. It didn't cooperate as planned so had to be removed and thrown out. What a gloppy mess.:( Left to create the needed texture anyway I could, I tried my best to do it with my fingers. I felt like I was back in kindergarten playing in the finger paints only the final results weren't as pleasing to the eye. I now have a very large board with an equally large piece of gesso covered paper lying on my kitchen table waiting for me to figure out "what next ?". I'll sort it out eventually and have every confidence I will triumph in the end and produce a lovely floral which I'll post on completion.

In the meantime I managed to catch Gizmo, my female cat holding still long enough to actually sketch. Will wonders never cease! She's the skittish kitty that inspired Undercover Kitty. At 14 yrs. of age, Gizmo has never weighed more than 7-8 pounds and bolts at the sound of a pin drop. Her ears and eyes are disproportionately large for her rather small face and her fur is long and the color of a double expresso. I've never been successful at photographing her so I was thrilled she sat long enough for the sketch. She may very well be the subject of my next painting while I sort out the gesso issue.
Posted by Billie Crain at 11:25 AM