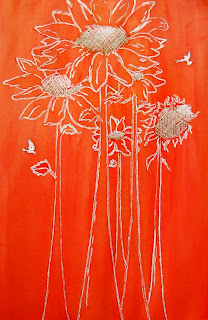 This is the result after another 4 pours, two with Pyrrol red, another just Indian yellow and one with a mixture of both. 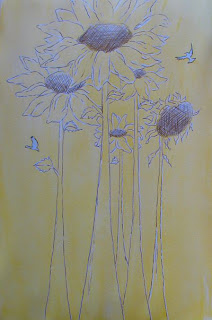 The first pour which was just Indian yellow. I used Frisket film to protect my crows. 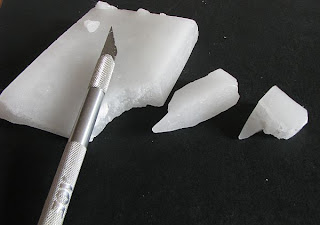 My wax 'pencils' which I carved out of a block of paraffin with an Exacto knife. I went over all the gold metallic pencil lines with the wax before starting my pours. 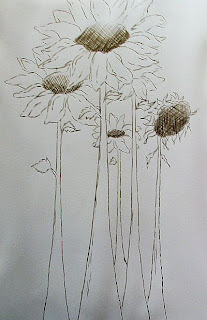 It's hard to tell from this image but here I've gone over all the lines with the gold metallic pencil. 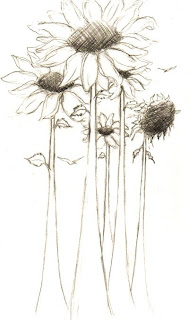 I decided to stay with sunflowers for my next project so I came up with a more stylized version. I made my sketch on drawing paper, enlarged it and transferred it to #140 Fabriano HP paper. I played around in Elements with an image of my drawing first to get some ideas regarding colors. After trying out a few possible palettes I settled on DR Indian yellow and DS Pyrrol red.

Once the drawing was transferred to my working paper I went over all the lines with my metallic gold Prismacolor pencil. I chose to do simple crosshatching for the flower's centers. I had a certain effect in mind and decided to experiment with paraffin wax as a resist. No special wax, just the stuff you melt to seal jelly jars. It worked but I found I had to be careful not to use a synthetic bristle brush over it or the wax would rub off. Conclusion? Pouring was my best option. I am using a squirrel hair mop to very gently guide the paint only when absolutely necessary and so far the wax is staying put.

Intention: I want to create the illusion of great size and height for these sunflowers so I added some crows, not only for suggested scale but also because I think crows are cool and they go well with sunflowers. I drew a few outlines of crows on tracing paper so I could see where to place them in the composition. As the crows were on tracing paper, it was also possible to flip the line drawings over to change the direction of the crow's outline giving me more options.
Posted by Billie Crain at 11:17 AM

What vibrant color...again, very informative. I like seeing how you work.
Cynthia a.k.a. Cynnie

I was shooting for some intense color, Cynnie. Pyrrols sure deliver, don't they?

wow this is really cool Billie! Thanks for posting all the details, very interesting to see how it is all done too :)

Thanks, Tracey! This was something brand new for me and I liked the graphic effect.