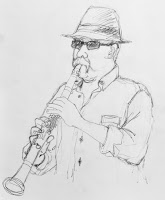 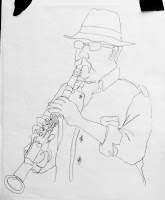 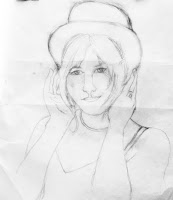 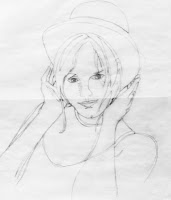 I've got two more victims on the drawing board, both inspired by more photos courtesy of frankin (PMP).  I liked the idea that their hands made it in the photo but I was concerned I might have problems rendering them. It's been a long time since I drew a pair of hands. Boy, was I wrong. Much to my surprise the hands turned out to be fairly easy. The girl's hat however became a nightmare. I don't like ellipses. Or they don't like me. Whatever.....anyhoo it's taken me two days and I'm still not entirely happy with the hat but I'm going to make do.

Above: the man drawing 1. the original drawing   2. a continuous line drawing

the girl 1. & 2. two tries. I never did conquer the hat. I finally resorted to tracing the darn thing.
Posted by Billie Crain at 1:37 PM