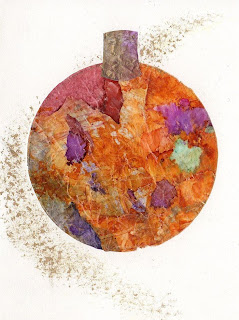 I've been laying down a few sheets of wax paper to protect my work surface when painting with the inks. Today was cleaning day which included replacing the wax paper which had become wrinkled and covered in dried ink. When I removed the tape that held it in place I realized the patterns that had formed from all the excess ink runoff were beautiful and shouldn't be wasted. I belong to a group of alcohol ink artists on Facebook and many of them have posted images of glass ornaments they have transformed with alcohol ink. Idea! The colors were not only just as vibrant on the wax paper but the crinkled texture was very intriguing as well. I cut out an ornament shape and glued it onto hotpress w/c paper with Mod Podge. I dipped a small sponge in a little of the gold mixative and stippled that around the ornament to create a subtle background. Ta Da! A Xmas card!
Posted by Billie Crain at 12:03 PM