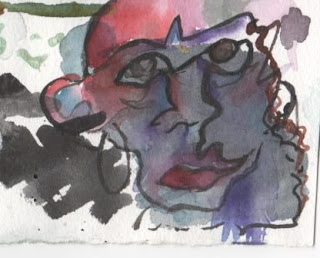 Last night I felt compelled to work on something creative but nothing I had in the works interested me. I picked up a piece of scrap w/c paper, a cheap brush and some ink and simply began doodling. I added color with leftover watercolor paint on my palette. I vaguely remember thinking the results looked like some of Myrna Wacknov's work. It was then left to dry and forgotten about. A few hours later I looked again at my doodle and realized I had painted a self portrait of sorts. The pose I rendered was the exact position I was in while doodling...head cocked at an angle, side of chin propped on back of bent hand, expression the same. Oddly, I've always felt that my ears stick out but not to the degree that I had painted them...thank God. Wish I had those voluptuous lips, though.

In reviewing this event today it made me think of free association. Free association is a psychiatric tool that is attributed to Sigmund Freud and is commonly used by therapists to help their patients figure out what's happening on a subconscious level. The basic premise as put forth by Ludwig Börne, who(according to Wiki) influenced Freud's conclusions...'write down, without any falsification or hypocrisy, everything that comes into your head'. I've used this technique with my journaling to figure out what's bugging me when the cause was not obvious and have had great success with it. The premise as Freud worded it(according to Wiki)...'where there is a creative mind, Reason - so it seems to me - relaxes its watch upon the gates, and the ideas rush in pell-mell'. My next thought... so why not use it as a tool for artistic creativity? A way to break artist's block or to become a more personally expressive artist?

A further search turned up this site:

The act of creation begins with the object.
The observed object is transposed into the painting.
The artist is bound to reality by line and color.

Conclusion: Whether I agree with Ms. Von Wrangell's theories or not, I believe the use of free association can be an extremely useful tool to artists and their creative process.