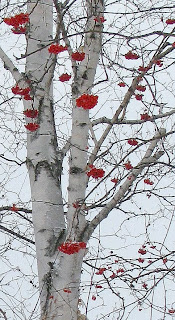 It's been a long time since I updated my blog. Summer has come and gone and winter is in full swing here in Michigan. It's made an early and vigorous arrival. We've seen snow almost every day and have experienced unusually cold temperatures for November/December.

I lost my muse this past summer. She took a hike but I feel the '*itch' returning at long last. I hope to have some new artwork to offer after the holidays. In the meantime, I saw this scene from my front window today and grabbed my camera to capture it. It was a battle between falling snowflakes, the gathering birds gobbling up berries and the 18° temps to get off a good shot. It's not the best photo but I loved the greys of the sky and the birch tree contrasted against the brilliant orangey red of the berries.

I haven't been entirely reticent in my artistic endeavors for the last several months. Sales at the gallery have been surprisingly good considering the poor economy. I also entered The Artist's Magazine All-Media Online Competition with 'The Cat That Swallowed The Moon'. This will be my first competition so we'll see how well that goes. Winners won't be announced until this coming March.
Posted by Billie Crain at 10:45 AM

SO glad to see you post! What an amazing photo - the contrasts in the white bark and red berries is stunning.
And really glad to hear your muse is expected back from her mid-summer walkabout. Looking forward to seeing what she brings with her!

Beautiful photo! I hope you paint it. While I have you, I want to wish you a very happy holiday season! Thanks for all your kind words this past year. They mean a lot.

Thanks, Anita.:) it has been a long time, hasn't it? i just wasn't in the mood and i can't seem to force it. i just have to ride the ebbs and flows of creativity.

Good to see you, Lisa and Happy Holidays to you also! i may paint this, i may not. time will tell. i just loved the look of the scene so i had to record it. i don't usually find winter beautiful but it does have it's moments.

Its good to see you back again Billie.

The photo's contrasts are lovely. The reds against the greys are fabulous.

Thanks, Jeanette.:) i hope to be productive again very soon.

Aha looks like we all missed you & your posts :) I love the photo, I would really like to paint it, the reds against the white, grays and darks are just beautiful. I never used to like winter either but over the past few years I almost miss it during the summer, strange! Good luck on the competion, so exciting :) Merry Christmas & Happy Painting in the New Year!

I think this is a gorgeous picture Billie. There is something so meaningful when we are able to vision such bright beautiful colors when the surroudings are either very cold and neutral or like in a desert when everything is earth color but the cactus flowers have such a brilliant color.

I want one of those trees w/berries outside my window. Maybe a painting of it, next? Get a zen board (see my blog) or some "magic paper" and start messing around with water and brush. You'll be painting again in no time.

Tracey, thanks for stopping by and all your comments & encouragement. also thank you for the well wishes. Happy Holidays to you, too.:)

Mary, that is so true. when the dreariness of a certain landscape is broken unexpectedly by even just one bright color it makes the whole scene sing. kind of like the cherry on top of a hot fudge sundae. let's be honest, it wouldn't taste nearly as good w/o it. LOL

Nick, i saw your Zen board. that thing is so cool! as for the tree, it's actually two trees. birch doesn't produce berries. the berries got into the 'act' because their branches overlap in front of the birch. makes for a neat color combo. one of those happy accidents.